When Facebook came out - MySpace was dropped by many people because of the new features, the ability to share, comment and do so much more with Facebook. Did MySpace die? No. It simply revamped and came back with new features, a focus on music and artists and (despite what many people think) still has a following and people who use their profiles. Is this another instance of MySpace/Facebook?

When it comes to features for the video app....

Instagram's video allows 15 second videos with filters, ability to delete the last clip taken, and the ability to save to your camera roll. Instagram video has the ability to apply filters to video? (Twitter added filters to their photos when uploading on their Twitter app - anyone tried it?)

Vine has a front facing camera, ability to save to your camera roll and……that's it. What is the up side of Vine? There is something to be said about the 6 second restriction. What can you make or get across to the Vine and Twitter world in 6 seconds? It is almost like a challenge that people want to take on. Who can come up with the best 6 second video - that creates a lot of creative submissions for contests.

After Instagram's announcement of their video feature, #RIPVine started trending on Twitter. Here are some of the tweets with the hashtag #RIPVine:

Andrew Hurley made a Vine about his final farewell for the app....see the whole video here: My Final Farewell 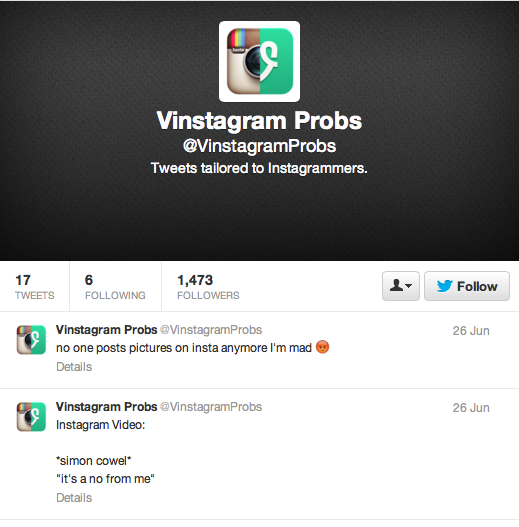 Some are a little more optimistic about the lifespan of Vine:

So where is the future of video sharing going? We started with YouTube, then Vine appeared and now Instagram video. The value of video sharing is still high - but do you think people's attention span will stay with a 15 second video compared to a 6 second one? It might be too early to tell...but we will be watching....

What are your thoughts on Instagram's release of video? Are the filters really necessary for sharing your video? Which app do you prefer for video?