Crisis & Reputation Management: Do you have it? 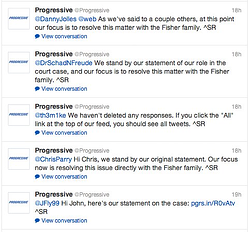 Recently Progressive Insurance has gone under fire of public scrutiny. Matt Fisher posted on his Tumblr account about his sister recently passing from a car crash she was involved in back in 2010. His sister, Katie, was killed by a driver who ran a red light.

He strongly felt that Progressive's legal team was going to be representing his sister's killer. Progressive, at a snail's pace, responded to Fisher's post and stated that they 'were not representing the defendant in the case.' Progressive's response, made by Chris Wolf - claims manager - was made 24 hours after Fisher's inital post.In social media and PR - that is a year's time. Wolf stated that Progressive was not the legal team for the defendent, the driver's insurance company - Nationwide - was his legal representative.

Progressive continues to get slack for their response and the way they have handled Fisher and his family. Fisher was unable to sue Progressive itself, since he refused to pay the remainder on her policy, so he sued the driver instead. Progressive stepped in to defend the driver, and in steps the current issue for Progressive.

As of this morning, Progressive made a statement saying that the driver was at fault for the accident. CBS News reported on the story with an interview with Matt Fisher, the victims brother. Click on CBS News to hear what Fisher had to say about the trial.

When it comes to crisis management, large, well known companies such as Progressive, need to be able to handle situations such as this in a timely manner. When comments, similar to Fisher's, are made, someone at Progressive needs to be scanning social media at all times. If they had someone scanning, their response would have come earlier and hopefully with a different styled response. The statement that was released by Progressive was robotic and simple.

Responses in a time of crisis needs to be well planned, thought out and directed at consumers. If the response is slow and standard, the trust in the company is immediately lost. Progressive could have responded with condolences to the family and that they were going to look further into the incident, rather than focused on constantly stating they are not the legal defense for the defendent. With major issues such as this one, that is getting national attention - someone needed to be paying attention and dropped the ball this time. Progressive is going to need a lot more than the humor of Flo to gain their customer's trust back.