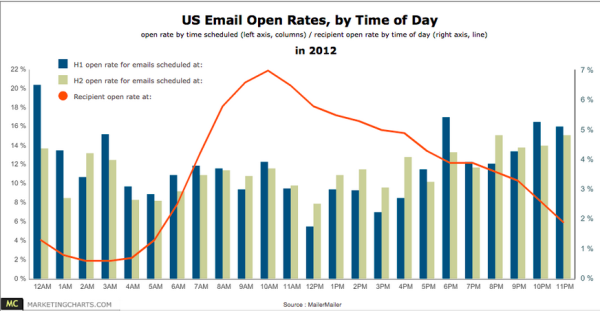 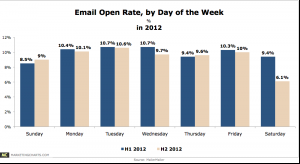 Email - What Days Have the Highest Open Rate?

Posted by: Jeff Davis - 11/26/2015
If you follow the link to the  Marketing Charts article, at the bottom is the following:


Open and Click Rates by Day of the Week


There was less variance when sorting by day of the week (these results not limited to US accounts), although some patterns were apparent. During H1 (first half of the year), email open rates were lowest on Sunday (8.5%), Saturday (9.4%) and Thursday (9.4%), while during H2 (second half of the year), Saturday (6.1%) clearly had the lowest open rate, followed by Sunday (9%) and Thursday (9.6%). While there seemed to be a clear trend for lower open rates during the weekend, the sluggish rates on Thursdays was a fairly curious result.


During H1, the lowest click rate was on Monday (1.5%), while during H2, Saturday had the lowest average click rate (1.3%).
Questions about how to improve your email performance?  Give us a call at (419) 776-7000 or send me an email jeff@thriveim.com
END_OF_DOCUMENT_TOKEN_TO_BE_REPLACED
0 Comments - Read / Write Comments
All Posts