“Mobilegeddon” is Not What You Think

Regardless of what you have read, “Mobilegeddon”, Google’s new search algorithm, is not going to put millions of companies out of business this week.

“The very best marketing comes from observing consumer behavior and inserting your message into their behavior.”

In all fairness to Google, they have been warning people of this change for awhile now. Consumers have been rapidly moving away from desktop devices towards mobile devices for more than five years.

Google is simply reacting to consumer’s behavior. They are telling businesses that it doesn’t do you any good to own a website that consumers can’t read.  Since providing the very best quality search results is Google’s primary mission, they are saying that providing mobile friendly results is important to the consumer, so it is important to Google.

And don’t think that consumers are not using smartphones to visit the web.  eMarketer reports that in 2014 the average consumer was on their smartphone for 2 hours and 51 minutes - with non-voice activities.  Moveable Ink recently reported “that 66 percent of emails were opened on either a smartphone (47.2 percent) or tablet (18.5 percent) in Q1.”

And while I do not see Google’s change spelling immediate doom for the average YMCA website (and other small to medium businesses), it is going to hurt over time.  As consumers search for “fitness centers, weight loss programs, family friendly play lands, swim lessons, spin classes” and all the other programs the YMCA is known for, mobile friendly sites are going to appear above the listing for the local YMCA.  And the listing for the non-responsive YMCA sites are going to be pushed further and further down until eventually they are going to start appearing on page two. The kiss of death.  Unless all your competitors already have mobile friendly sites. If so you can start kissing now. 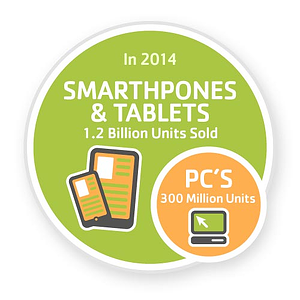 A quick look at your site through the eyes of Google's Mobile Grader will show if your current site is mobile friendly.  If not, it will report that the text is too small to read, links are too close together, the content is wider than the screen...

The choice is yours, but ignoring the consumer’s rush to mobile devices is not the decision you want to make.